In January, I got an email from Another Mother Runner (AMR) that I almost ignored.  I get their newsletter and I admit, I don’t always read it (but sometimes I do!).  We are all inundated with the emails from all the things, right? Even things we are interested in.  Anyway, a few days after I received it, I had some time to sit down and really see what was in my inbox vs. just scrolling through for the items that needed responding ASAP and I realized that email wasn’t the newsletter at all – it was an email from Sarah Bowen Shea, one of the hosts of the AMR podcast, asking me to participate in an upcoming episode on single mother runners.  WHAT?! Cool! I emailed back that I was all in and we set up the logistics of date, time, and how (via computer or land line).  I told my fiance I was going to be interviewed for a podcast and needed a land line (I don’t have one and I was fearful of fucking this up if I connected via computer).  Luckily, the interview was happening on President’s Day, when I was off from work, the kids were with their dad on winter break, and I would be at my fiance’s house anyway.  My supportive guy offered up his land line and, more epic than that, the use of his HAMBURGER PHONE, which I had gifted him early in our relationship because I’m, well, me.  Logistics were set, now I just had to deal with the nerves and how to hit everything I wanted to say on the topic of being a single mom and running in a 15-20 minute window.

Stepping back for a minute, how I even came on AMR’s radar was not because I am so Insta famous (I am not, please follow my ‘gram) but because I had applied in late 2018 to be a BAMRbassador for 2019.  I didn’t get in (why? I’m so charming? LOL), but my application caught Sarah’s eye and she kept it in mind for this podcast episode she’d been wanting to do.  Plus, I had been interviewed by Tish Hamilton in early 2018 for AMR’s annual goals column (Tish is also a single mom runner badass).  So, that’s how it all came to be that in February,  I was sitting in my fiance’s finished basement doing a podcast interview on a hamburger phone.

The morning of the interview, I wrote myself some notes on what I wanted to hit in the interview and handy reminders like “DON’T CURSE” and “SLOW DOWN.”  The interview went surprisingly well and you can hear it here.  I didn’t curse, which is a fucking miracle.  I didn’t speak too fast.  And while I hit many of the points I wanted to, there were some that I did not hit just due to time constraints or the conversation going in another direction.

By way of background, anyone who knows me will attest to the fact that I am not exactly shy, nor do I mind sharing (“oversharing” maybe) with the general public and being vulnerable.  However, the couple times I’ve been interviewed by some outside body like AMR, I’ve had to quiet that voice that pipes up and tries to fool me into thinking that I have nothing worthwhile to say, that my voice is worthless except to those in my immediate circle, if even them.  The weeks in between the scheduling of the podcast and the interview itself, I just told that voice I heard it, but I was going to go ahead with the interview anyway.

Here, in no particular order, are the subjects I didn’t get to touch on during the podcast interview, but had hoped to:

Well, that’s a list.  Again, it was only a 15 minute convo and I didn’t dictate the flow or questions.  I still think it was a good interview and I’m proud of the result, but I’ve been kicking myself the last 6 weeks over not somehow tying in the body positivity movement into the whole “how do you do it all/stay motivated?” thread.

Anyway, I hope that you’ll give the interview a listen and maybe take something useful away from it.  If you know someone who may like it, pass it on.  Us single mom ultrarunners are a rare (and sleep-deprived) breed.  And I’ve often felt left out of the “mother runners” movement because single mom’s have such a different set up going on and the “hows” of how we do it all can sometimes look very different.  I was happy for the chance to talk about it for a bit, along with some other badass single moms on the podcast! Get it!

P.S. It’s been a minute.  I started writing this right after the pod dropped and then lost all steam.  I’ve thought of coming back to it, but had a block for some reason.  So, today, I wanted to get in and get it done.  It’s now spring (chilly and rainy most days here in Upstate NY, with some rare warmer days) and spring training is upon us.  I’m wrapping up training for a stupidly early spring half, the inaugural Helderberg to Hudson Half which is being put on by my excellent running club, the Albany Running Exchange, on April 13th and should be an amazing local running community event.  I’ve gotten out on trails once already and found my mojo out there that’s been missing for months .

I’ve also been getting back to Track Tuesdays more regularly now that the track is cleared of snow.  This weekend, I officially “rehire” my Coach and get back at it.  My eyes, legs, ears, mind and heart will happily be turning towards a solid six months of hefty trail training leading up to the Catamount 25K in late June, Water Gap 50K in early September, and culminating in my goal of completing my first 50 miler (or DNF trying) at Hennepin 100 in early October.  Hopefully, my blogging will pick up with my running club’s annual Frun Day taking place tomorrow and many race reports to come! May you find your joy as you start getting into your spring/summer training!

P.P.S. I also completed an indoor tri (my first ever!) in March.  It was pretty crazy, seeing as I am not a trained swimmer and doggy paddled/back stroked my way through the swim portion.  So happy I had some of my badasslady gang by my side and cheering from the sidelines (including my incredibly fiance and adventure partner who was waiting for me with Starbucks at the end)! This was a big “never do” for me and I’m glad I gave it a go!

With my tribe, Rebecca and Jess, who convinced me to do this nonsense. Or the other way around. 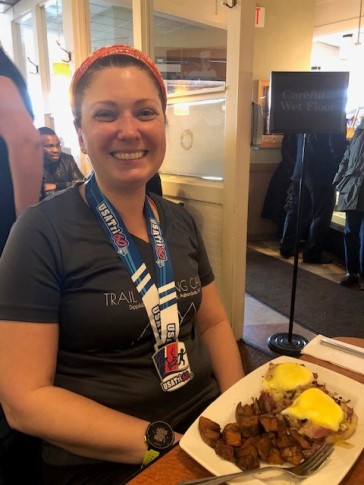 Do all the multisports, eat all the food!
Advertisement